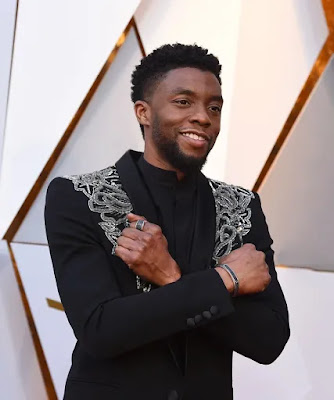 I plan to write a post about how f*cked up 2020 was before the year ends. 😔 I feel the need to express in my own words how exhausting, depressing, and brutal this year has been emotionally and spiritually.

I wanted to dedicate a post to one of my favorite actors, Chadwick Boseman. I found out he passed like many people when the news broke on social media last Friday night. My sister is always the bearer of bad news regarding the deaths of some of my favorite actors and musicians, so like clockwork, she was the one that showed me a screenshot of the headline "Chadwick Boseman dies from colon cancer at the age of 43." I couldn't process the words that I was reading because it was unbelievable. I thought it was fake until more credible sources confirmed the news. For almost an hour, my sister and I sat in silence on the couch reading headline after headline that our beloved superhero was dead. I shed tears going to sleep thinking about his death, and I woke up the next day in the same somber mood hoping there was a possibility that the news was false.

Let me explain why his death hits differently for me, why it feels so painful and personal. My sister and I were extras in the James Brown film called 'Get on Up.' The movie was filmed in our home state Mississippi, so we had the opportunity to see Chadwick up close and personal as a superstar in the making. The short time I spent on the movie set was such an exciting and memorable time in my life. That experience is why I started back pursuing writing and film because it reignited my passion for the arts again. Every time I would see or hear anything about Chadwick, it would take me back to those exciting memories.

My sister played an extra in some of the smaller scenes in the film, so she was able to talk to Chadwick.  I got selected as an extra for a church scene, and during a break in filming, I saw Chad sitting alone in a corner.  I wanted to walk up and introduce myself and ask him questions about how he felt portraying a legend like James Brown. I was nervous, so I let the moment pass. Fortunately, we got invited to attend the movie premiere for 'Get on Up' in Natchez, Mississippi. It was there that I was finally able to meet Chad. We made it to the screening at the perfect time because Chad and the director Tate Taylor walked right by us a few minutes after we arrived. My sister called Chad's name and asked if we could take a picture. They were in a hurry, so he looked back quickly and said he couldn't at the moment, but then he stopped and turned back around because he recognized my sister. He got a big bright smile on his face and walked back towards us. He looked at both of us and said, "there are two of you?"......"you tricked me".... then he started laughing. He was so down to earth, genuine and nice. The director offered to take the picture. Chadwick told me it was nice to meet me, and he told my sister it was nice meeting her again. That was over six years ago.  I still have the picture of that moment, and I will forever cherish the memory.  Since that moment, we've watched him morph into one of this generation's biggest stars. 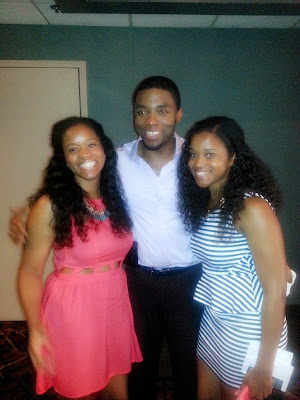 July 2014
When Black Panther was released in 2018, I was one of the many people to dress up in all black and head to the movie theater. I wasn't a comic book or Marvel fanatic, but this movie was bigger and more significant than just watching another film. To see black excellence presented on this magnitude and for the film to become so successful and widely received across the world was so inspiring. I was proud. We were all so proud. Even though Chadwick was playing a character, he was symbolic in our culture. He was our hero, he was our King, and he was more than just a great actor. After the James Brown movie, I researched everything I could about Chadwick, and I loved everything about him. He was talented, intelligent, cultured, caring, and intentional about the roles he chose to portray. He wanted to make sure we saw ourselves in a more positive light.

Towards the end of last year, pictures and videos of Chad looking frail started to appear online. People dragged him and talked about his appearance. I feel bad because I commented about how sickly he looked, and I remember laughing at a lot of the comments online. I never imagined or assumed he was actually ill, so when the news confirmed he had been battling stage 3 colon cancer for four years, it made his death even more painful. We laughed, not knowing he was quietly suffering. While battling cancer, he made some of the most significant and impactful films of his career, and he never complained or spoke publicly about what he was going through. I wonder if he knew his time was limited, and that's why he chose to put all the energy he had into work that would outlive him and inspire generations to come. His death has made me reflect on my legacy and what impact I will leave behind. It makes me want to pursue my passion for writing and film even more because we don't know when we will leave this world.

Rest in peace Chadwick. Thank you for the dedication and passion you put into the amazing body of work that you created. I'm so grateful I was able to be in the presence of greatness. You will forever be our King. #Wakandaforever 🙅💖

In my latest podcast episode, I shared more details about my experience meeting Chadwick and working as an extra in the film 'Get on Up.'