Walking Towards My Destiny 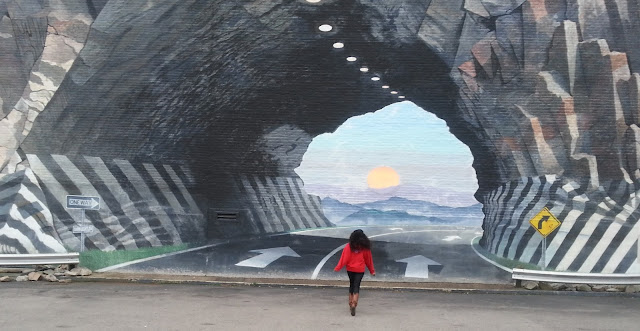 
I absolutely looooved this mural when I saw it so I had to take a quick pic because I’m a sucker for dope and creative art. The mural is called Tunnel-vision and it was painted by an artist named Blue Sky in the 1970s. You can find the artwork on the wall of the Federal Land Bank Building in Columbia, SC. A guy snapped this picture of me at the end of last year and I didn’t realize how symbolic it was until after he took the shot and I looked at it on my phone. I was planning on taking the picture facing the front but he took the pic while I was running towards the mural which turned out to be a great shot.
I posted the picture on my Instagram and I captioned it “Walking towards my destiny.”  The picture perfectly captured the stage of my life that I’m in. At the end of last year I made the decision to step outside of my comfort zone so I moved to a new unfamiliar state without a plan or clear direction for the next step in my life. For the most part I’ve played it safe with the decisions that I have made over the years so this was a huge step for me to take. I can’t lie and say this path has been easy because it hasn’t. I’ve been nervous, anxious, bitter, angry, sad and I’ve second guessed my decision so many times. Taking this journey has caused me to be hit with a lot of highs and lows but along the way I feel like the pieces to the puzzle are starting to come together and I’m discovering my lane.